I love simple syrups. I use them for tea, for cocktails, for flavoring in sparkling water and I generally have several flavors at the ready. Some I enjoy on their own while others I combine to create more complexity in my drink of choice. Be creative, get inspired and enjoy a refreshing beverage of your own on a hot summer day! 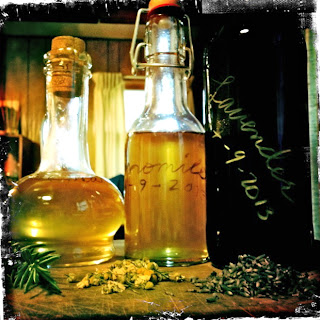 My basic recipe is the following (for a light syrup and of course adjust accordingly it you prefer sweeter):

Bring water and flavoring to a boil, reduce heat and add sugar. Simmer until sugar is melted and flavors have married (I usually let it go for about 10 minutes). Let cool, strain, bottle and refrigerate.

I love using the rosemary syrup with lemonade (a sprig of fresh rosemary makes a beautiful garnish). Chamomile is perfect with soda water (you can add a bit of milk or cream to make your own Italian style soda) and lavender is a favorite in my morning cup of Earl Grey tea. How would you enjoy using them?
Posted by The Olive & Vine at 3:42 PM 1 comment:

Spice, whole vs. ground and the winner is? 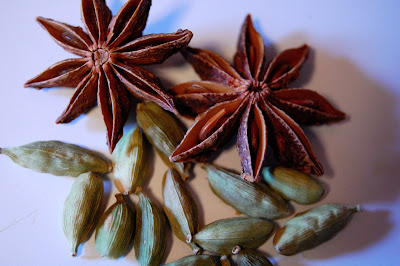 Let’s talk spice! We get so many people stopping by the shop asking for ground spices that I need to mention as convenient as it is to reach for something that is already pre-ground when cooking dinner after a long day at the office, this doesn’t bode well for flavor, impact and in the end, your wallet. Most spices begin to lose their flavor shortly after grinding and generally by the time you pick up a jar in the grocery store you’ve already got a compromised product and one that you’ve most likely paid more for than the whole unadulterated spice itself. 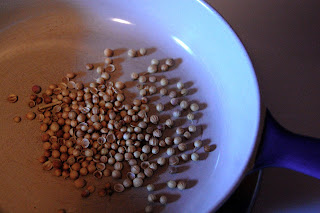 To get the most out of your whole spice, a light toasting is a great way to tease out the flavor before you grind and offers up the best results. I use a small cast iron pan to gently toast over medium heat until the aroma is released (no need to add anything other than the whole spice itself). Once it begins to reveal it's fragrance, pull from the heat and set aside to cool. Now it's time to grind it if that's what you need or use it whole – it all really depends of what end result you are looking for. 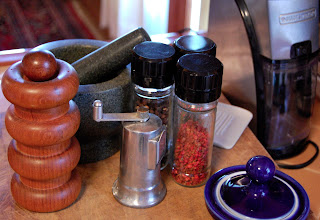 To grind or not to grind, that is the question! Is it better to use mortar and pestle, electric grinder, hand crank or grater? Well to be honest, I think the best method of grinding is the one that you will actually use and also depends on the grind you are looking to achieve. At home, I use all of the above and have several grinding apparatuses on hand to get the job done. Yes, it does take a few extra minutes to toast and grind your spices, but it makes a world of difference and at the end of the day you’ll have better flavor while using less spice and saving yourself a fortune in the long run. Some spices can be very pricey and although that bulk bag seems tempting, unless you are running a restaurant or feeding an army, don’t do it, it’s just not worth it. It is better to buy in smaller quantities from a reputable spice shop that turns over their product at a rapid pace to ensure freshness than to spend your hard earned dollars on something substandard. 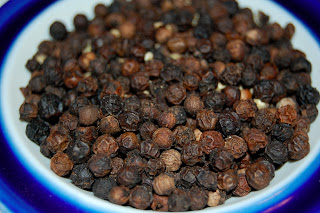 For example, peppercorns start to lose their volatile oils within 30 minutes of grinding and by the time you’ve had ground pepper hanging around for a month it is pretty much done. Try an experiment. Grind some pepper and give it a taste. Put the rest away and taste it next to some freshly ground  a week later. Do this again at 2 weeks, 3 weeks and so on. The change is pretty dramatic and once you experience it, I think you may never buy pre-ground pepper again. It really does make that much of a difference.
Now that said, there are some spices that I buy pre-ground and mostly those include spice blends that may be too complicated and pricey for me to try blending myself or some hot peppers and roots and things that may be more of a hassle that I am willing to put up with or require a mask and goggles to grind. As with anything, use your best judgement and keep it as simple as you need it to be.